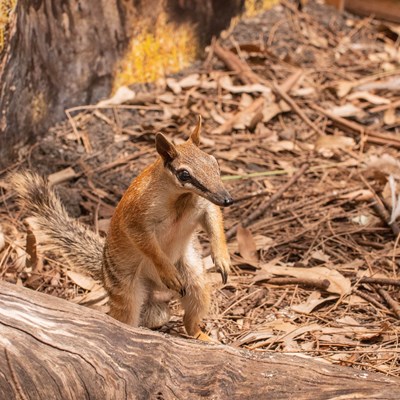 Frankie the rescue Numbat joined the WILD LIFE Sydney Zoo family at the end of December 2020.

Although new to Sydney, Frankie is no stranger to locals who first heard of the Numbat in 2016 when he was found abandoned and separated from his mother. The then barely seven-month-old was taken into the care of Western Australian community group Project Numbat and shortly after adopted and raised by specialists at Perth Zoo.

Fast-forward four years and Frankie was healthy, happy and ready for a new adventure, so he set off to complete his first domestic flight to Sydney. His successful journey ended with him stepping into the new Tricky Tongues and Treetop habitat, a split space with one side designed specifically for Frankie’s needs and the other for Kofi the Tree Kangaroo who arrived last month.

On the east coast at WILD LIFE Sydney Zoo, Frankie acts as an important ambassador by raising awareness and educating visitors on the endangered status of numbats and their critically low numbers in the wild. Frankie and his fellow numbats are native to Western Australia where they are classified as endangered due to habitat loss and invasive predators such as cats and foxes. Currently, there are fewer than 1,000 numbats left in the wild. Community groups such as Project Numbat were established to raise awareness of the numbat and carry out conservation work such as habitat management and population monitoring.