Learn about our species of birds The Bush Stone-Curlew, or bush thick-knee, is a large, mainly nocturnal, ground-dwelling bird endemic to Australia. It specialises in hunting small grassland animals such as frogs, spiders, insects, molluscs, crustaceans, snakes, lizards and small mammals. Despite their ungainly appearance, they are steady, fast and agile. It is found in all states, except for Tasmania but numbers have drastically declined in south-eastern parts of Australia and it is now endangered in New South Wales.

The Bush Stone-Curlew’s can be seen in our Gumtree Valley exhibit. The princess parrot is a medium-sized parrot. Their feathers are mostly green with a pink throat, bluish crown, and bright green shoulders. The males have longer tail feathers and brighter colouring than females. The male also has a coral-red beak, while the female's is duller and has a greyish crown. WILD LIFE Sydney Zoo has an array of Princess Parrots which you can see in our Kangaroo Walkabout exhibit. 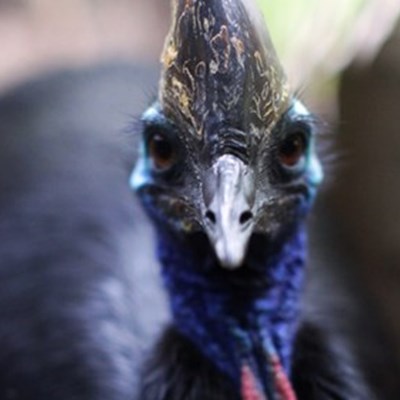 The cassowary is the world’s deadliest bird using its inner nail to defend and attack its predators. Similar to its relatives the emu and ostrich, cassowaries are a flightless bird, meaning that they can’t actually fly.

Unfortunately, cassowaries and their habitats are under threat due to deforestation. With the help of the WILD LIFE Conservation Fund actions are being taken to help preserve their habitats.