Go back to blog

On March 3rd 2022, World Wildlife Day will be celebrated under the theme: “Safeguarding key species for ecosystem restoration”. In honour of this year's World Wildlife Day theme, we have chosen to honour our keystone species: The Cassowary, the Bilby and the Tasmanian Devil.

What is a keystone species?

The Southern Cassowary aka. The Rainforest Gardener

Cassowaries have the unique ability to swallow fruits whole, digesting only the pulp and then passing the seeds along entirely unharmed into large piles of dung ALL over the rainforest! Many other animals in the Australian rainforests depend on these fruits and plants and therefore depend on the cassowary for survival.

The Cassowary has been known to eat and aid in the dispersal of over 200 different species of plants!

The Bilby aka. The Soil Engineer

A nocturnal marsupial with big ears and a small body? Ring any bells? How about the “Easter Bilby”? Now it’s starting to sound familiar! The Bilby's claim to fame might be Easter, but it’s not the bilby’s most important job: they are also soil engineers.

This small and mighty marsupial can dig through 1.5 tonnes of soil in a lifetime!

The Bilby is considered a keystone species as it plays a crucial role in the balance of the Australian ecosystem. Using its front paws, the Bilby digs deep down into the soil and as it does this, plant material falls into the holes and can decompose. This aids in soil restoration and vegetation rejuvenation.

The Tasmanian Devil aka. The Scavenger

The Tasmanian Devil is native to Tasmania and plays the part of both scavenger and predator within the Tasmanian ecosystem. They are actually at the top of their food chain! Early European settlers were mystified by the unusual screams and growls this animal made, and so they named them “the devil”.

The Tasmanian Devil is considered a keystone species due to the vital role it plays in maintaining the balance of the Tasmanian ecosystem. Being the largest native predator in Tasmania, the Tasmanian Devil is thought to keep other introduced predators numbers down. And by moonlighting as a scavenger, they eat left over scraps of meat which in turn leads to a decrease in blow fly numbers.

On December 20th 2013 during the United Nations General Assembly (UNGA), it was declared that moving forward March 3rd will be known as World Wildlife Day #WWD. The sole purpose of this designated day is to celebrate and raise awareness of the world’s wild animals and plants.

To find out more about our keystone species and our conservation projects click here. 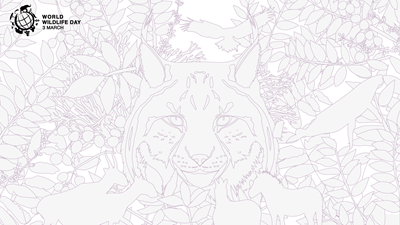